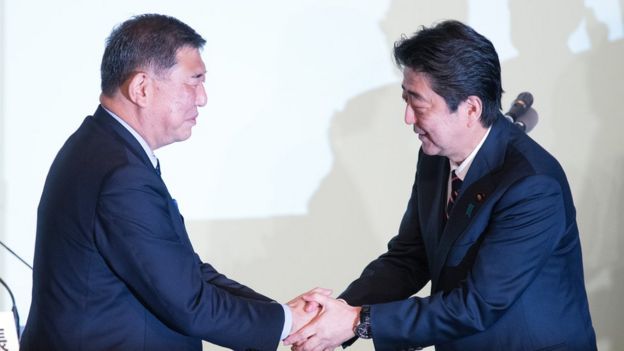 To his critics, Mr. Abe represents the attitudes of an older, conservative generation intent on downplaying Japan’s wartime record, while pursuing a potentially troubling and overly assertive foreign policy.

To his supporters, the prime minister has boosted the country’s global standing, realizing its national interests by harmonizing its legitimate ambitions with its clout as the world’s third-largest economy.

As an instinctive conservative politician intent on restoring Japan’s pride both at home and abroad, Mr. Abe worked consistently during his eight years in office to bolster the country’s national identity and historical traditions.

He reaffirmed the position of the emperor in Japan’s civic life (ushering in the new “Reiwa” era and helping notably to manage the transition to a new emperor following the abdication of Emperor Akihito in April 2019); moved away from overly self-critical historical narratives in high-school textbooks; and sought (ultimately unsuccessfully) to revise the country’s post-war constitution.

This nationalist agenda has been primarily domestically focused.

By contrast, in foreign affairs (whether in security or economic policy), Mr. Abe has been a quintessential pragmatist.

He reinforced existing alliances (most notably with the US) and developed new partnerships with regional and global actors, both democracies and authoritarian regimes, independent of their ideological leanings.

Mr Abe’s achievements as prime minister have, like so many political careers, been the result of a combination of good luck and shrewd electoral calculation and timing.

His victories in six electoral contests (three lower and three upper house contests since 2012) have been facilitated by Japan’s weak and fragmented opposition parties and by Mr Abe’s unremitting focus on delivering economic prosperity for a domestic electorate that is non-ideological and prizes stability at home over foreign policy adventurism abroad.

Success for Mr Abe has been achieved (as was the case with his comparably reformist predecessors, such as Junichiro Koizumi in the 2000s, or Yasuhiro Nakasone in the 1980s) through gradual, incremental reforms, rather than abrupt departures from the consensual model of politics that has typified post-war Japanese politics.

In security policy, the results of this painstaking, gradualist approach can be seen in a number of key areas.

They include the establishment of Japan’s National Security Council (NSC) in 2013; the passage of a new State Secrecy Law in 2014 and provisions allowing Japan’s Self-Defence Forces to participate in collective security operations; annual increases in Japan’s defence spending (a 13% increase over Mr Abe’s time in office); the development of a more flexible defence doctrine; and the acquisition of valuable new military hardware, including F-35 fighter aircraft and new Izumo-class helicopter-equipped destroyers capable of enhancing Japan’s regional power projection capabilities.

As recently as this month, Defence Minister Taro Kono has talked ambitiously of Japan potentially joining the Five Eyes intelligence partnership between the UK, US, Australia, New Zealand and Canada – an indication of how Mr Abe’s “proactive pursuit of peace” approach has become the new normal in Japanese foreign policy.
Mr Abe should be credited with success in maintaining a close relationship with Donald Trump and using diplomacy as a tool to offset some of the bullying tactics of America’s transactional president.

While Japan remains, like so many US allies, under pressure to increase its defence spending and host-nation support for US troops, Mr Abe has avoided a debilitating trade war with the US and the fundamentals of the alliance partnership remain strong.

More broadly in terms of foreign policy, Mr Abe has been a diplomatic innovator and demonstrated a capacity for strategic thinking that marks a sharp departure from past premiers, who have often been either reactive to external events or inclined passively to follow Washington’s lead. 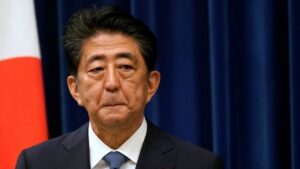 This change under Mr Abe is reflected in a new host of new strategic partnerships with India and Australia; defence agreements with South East Asian countries; ambitious bilateral foreign and defence partnerships with the UK and France; and the articulation of a new Indo-Pacific vision intended to harmonize economic and security policy with a range of countries spanning the Pacific and Indian oceans.

Mr Abe’s foreign policy innovation has been matched by a raft of bold multilateral and bilateral trade initiatives, for which the prime minister has had to confront key domestic political constituencies, particularly within the agricultural sector.

He played a decisive role in reinforcing the Trans-Pacific Partnership (TPP 11); secured a breakthrough trade agreement with the European Union in 2019; and negotiated a number of financial and development agreements with China in 2018.

Sensibly, while Mr Abe has remained acutely aware of the geostrategic threat posed by China, this has not been allowed to block opportunities for pragmatic co-operation with President Xi Jinping.
Pragmatism has also underpinned the prime minister’s signature “Abenomics” approach to domestic economic management, allowing for innovation in the “three arrows” of fiscal, monetary and structural policy.

Here, however, success has been arguably less substantive and more presentational – consistent with the Abe administration’s focus on messaging as much as delivery.

Reflecting the challenge of transforming corporate and consumer sentiment, Japan’s Gross Domestic Product (GDP) in the 2nd quarter of this year remains, at ¥485 trillion ($4.6 trillion; £3.5 trillion), less than the ¥504 trillion recorded in the January-March 2013 quarter shortly after Mr Abe took office.

Despite all these notable achievements, Mr Abe’s public standing at home has in the last year taken a heavy battering in the wake of the increase in an unpopular sales tax from 8% to 10% in 2019; a series of damaging corruption scandals; partial achievements in delivering on the promise of “womenomics”; and, most important of all a mixed record, in confronting the Covid-19 crisis and the related-disappointment from the postponement of the Tokyo 2020 Olympic Games.

With approval ratings for the prime minister and his cabinet flat-lining in the mid-30s – the lowest it has been since 2012 – it is no surprise that Mr Abe, confronted by a recurrence of his chronic health problems, has chosen to resign.

He departs the political stage undoubtedly deeply disappointed not to have achieved some of his key political ambitions – most notably his cherished goal of constitutional revision and the resolution of territorial disputes, including the “Northern Territories” negotiations with Russia left over from World War Two.

Post-Abe, Japan’s political scene will remain relatively stable in the short term, with the Liberal Democratic Party securely in power, given its commanding majorities in both houses of the Japanese parliament and the absence of any formal obligation to call a general election until the autumn of 2021. 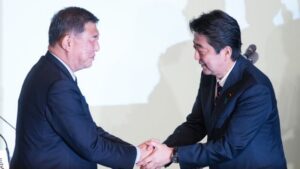 However, the battle to succeed Mr Abe has already begun, with Shigeru Ishiba, a former defence minister and Mr Abe’s longstanding party rival already signalling his intention to contest the premiership.

Mr Ishiba has broad public appeal and his message in favour of greater economic equality is likely to play well with the general public.

However, the decision on a successor will be decided by party members (potentially including both parliamentarians and prefectural representatives), who are likely to be influenced by a range of factors.
Image copyright Getty Images
Image caption Shigeru Ishiba, pictured with Mr Abe, has signalled his intention to contest the premiership

A continuity candidate, such as former foreign minister Fumio Kishida (who is seen as uncontroversial), or a party insider such as Chief Cabinet Secretary Yoshihide Suga, may all prove effective.

More wild-card options include Mr Kono (who lacks factional strength within the party) and Environment Minister Shinjiro Koizumi, who remains popular with the electorate but whose relative youth (at 39 years old) may count against him.

In terms of the economic and security challenges faced by Japan, each of these candidates is likely to want to acknowledge and capitalize on Mr Abe’s genuinely substantive policy achievements.

The practical, incrementalist successes of the outgoing premier are also consistent with the political traditions of the LDP and offer the safest and politically least controversial foundation for any future leader needing to rebuild trust and expand the support of a discriminating and non-ideological Japanese electorate ahead of any future general election.

Notwithstanding Mr Abe’s aspirational, but at best partially realised nationalist ambitions, his pragmatic achievements are likely to be his most enduring legacy.
HOW TO DOWNLOAD PUBG MOBILE BETA FOR IOS AND ANDROID